I want to go long term cruising. I have thought about getting a Jeanneau 490 or 51 but the price to upgrade is 400k for a 490 and 500k for a 51 if I go new again. Then, I'd still need a bunch of work to get them ready to cruise. That's a lot of money for the extra room which would be nice but it's not like the 439 is small.
So, instead, I decided to keep the 439. There are just 2 of us 99% of the time regardless. I contracted Maine Yacht Center in Portland Maine to do the following work.

We swapped the aft sbd water tank for a diesel one and installed NMEA fluid level sensor to accurately report fuel levels to the plotter. The stock water tank is not suitable for diesel and Jeanneau don't make a sbd fuel tank so one was fabricated. We installed calibrated NMEA tank level sensors for fuel tanks. The stock factory ones are basically garbage. The tanks are irregularly shaped so these have 5 calibration points to ensure much more accurate readings that are visible on the plotter.
Motoring range improved dramatically on the boat. I can run the 57hp yanmar at 1.5k rpms and it burns about 1.5L/hour at 6 kts. The boat now has 400L of diesel which translates to a motoring range of 1600nm. This requires racing the engine every 2 hours per the Yanmar manual to avoid carbon build up. Running at a more normal 5L/hour at 7.5kts, it's about 600nm. The tanks use a new manifold to join run or use either one independently. They feed to the stock Yanmar fuel filter lines. The boat had two water tanks, an 87g fwd and a 50G aft one. We have the one 87G tank now with a watermaker.

I also added a Racal 500 dual polisher which uses the new fuel manifold. It's not inline to the engine yet. It can polish the fuel from one tank while using the other. It can also transfer fuel between tanks.

We added 1150W of Solbian SP1 solar. This was added to the bimini, dodger and deck of the boat. About 750W on the bimini/dodger and 350W on the fore deck. Each has a controller to minimize shading impact. This should generate between 300 and 500aH of power daily (we'll see in practise) depending on conditions. They use a combination of genasun and Victron solar controllers (depended on max voltage from panel strings). 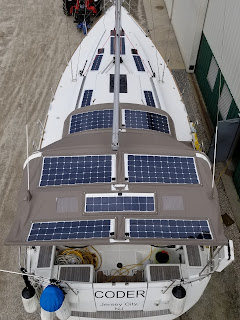 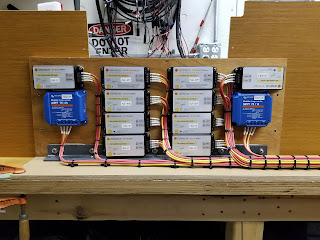 2 x 12v600aH relion batteries each with a BMS. The engine and bowthruster batteries (AGM) are charged with a DC-DC smart charger from these. Each 600aH battery is independent for redundancy. A parallel switch was added to allow the engine/bow batteries to also use lithium if needed.
Dual 3kw/120a Victron inverter/chargers. The boats shore power now connects only to these. One is for the house (water heater and internal AC sockets) and one is for the Air conditioning units. Two of these gives redundancy. The batteries now charge from shore power at 240A per hour. Shore power is cleaned up using the inverters before the boat uses it and the draw from shore power is limited and the batteries absorb spikes (AC starts for example) limiting wear on cables. We have had our power cables to shore burn out already on the AC side. Note to Jeanneau: You can't run a 16K and dual 8K AC units on a single 30A shore cable if they start together...
360A alternator with Balmar smart regulator. This lets us charge lithium batteries from the engine if necessary with minimal run time. It's derated at 300A per hour. The cooling for the engine compartment was improved to handle the heat. The alternator is physically the same size as the old one but needs new pulleys and belts. There is a cockpit switch to disable it for low RPM motoring. 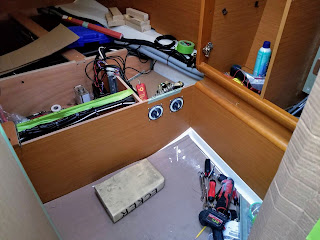 The boat uses about 186aH daily at anchor (no air con loads). I have a dometic dual 95L fridge/freezer on the boat also. The boat burns about 230aH daily sailing. The 1200aH gives a usable 1000aH which is basically 5 days sailing with no sun. Most days we expect to discharge them to 80% which means the life cycle times on the batteries are in the tens of thousands of cycles. The Solar panels should generate more than this typically so the boat would be fossil fuel free when sailing OR at anchor. Worst case, we start the engine and are charging at 300A per hour minimizing run time.
All 3 Air units (16K and 2 8K dometic units) share their own inverter. We will likely just use either the 16K or a single 8K in practice when anchored or sailing. They can both heat (water temp > 40F) or cool the boat. At water temps < 40F, the boat has a Webasto 5500 powered by diesel.

Village Marine 145GPD 12v water maker. This is mounted under the fwd bed with a sample tap in the fwd head. 6gph which isn't great but it's compact. It's above the fwd berth large drawer, sample tap is in the fwd bathroom and the thru hull is just forward of the keel.

Bruce Schwab from ocean energy and I hatched the project and Steve Ecker from Maine Yacht Center designed/installed the system. I gave up half the hanging locker in the port aft bedroom to house the invertors. The cabinet had cooling installed.

Doing this wasn't cheap but the boat is pretty transformed as a result in terms of range and comfort under way or at anchor. The goal was to minimize/eliminate consumables (diesel and propane). We will use electrical appliances for cooking. I am thinking of removing the propane completely which frees up the sbd aft locker for storage/systems access and we can remove the stove/oven and replace with a gimbaled counter and storage. An instant pot, electric grill and kettle will likely be the most used cooking appliances with a camping stove and our magma as a backup.
The work is top notch (Bruce and Steve are pretty amazing) and the lithiums are as safe as it's possible to make them. All work is to a very high standard. After making this investment, I think our Jeanneau is pretty much one of a kind right now and I can't wait to go cruising on it. The work is in the later stages of completion now and I'm hoping to pick the boat up in April (winter got in the way) and use it.
Posted by bnewport at 7:30 AM