We took the boat out a few times but it was very clear to us that we'd forgotten most of what we learned on our ASA 104 week last year and that we needed docking instruction immediately. We had managed to dock the boat a couple of times backwards pretty well but we had a very bad docking experience a couple of weeks ago and luckily avoided damaged our boat or other peoples boats so that was the point basically where I decided I wasn't taking it out again without instruction first.

So, we looked around for a school. I was going to do the Maryland School of Sailing's docking course but the couple of times I emailed them, they have never answered so that was that. I called the Manhattan sailing school and asked about instruction on my boat and they can't do that for insurance reasons but they put me in point with one of their instructors, Mike, who we are very happy with.

He took me out for about 3 hours the first day. The initial idea was to stay in the canal and get used to turning the boat in a narrow space using the engine but I wasn't comfortable and was basically afraid of hitting something so we went in to the hudson and played around there. I gradually figured out /remembered how it works and then we went back to the canal. It seemed a lot bigger now and I was better able to spin the boat in the canal using engine pulses and so on. Eventually, it came time to do a docking attempt and I went in bow first and it worked pretty well. We came out again and then repeated another couple of times. Mostly, this went well except for a couple of times where I came in at too shallow an angle by turning early.

The next day, Mike came again but we went sailing for 3 hours instead. That went well and things started coming back to us about how this all works again. The docking went well also and I brought the boat in and Mike was showing my wife how to do the dock lines.

These 6 hours were hugely valuable and have made a huge difference on confidence and handling for me. I'm by no means an expert yet and we'll likely be using Mike a couple of times a week through this year to gain more skill and confidence.

Slip wise, we are adding an 18" inch inflatable globe fender which rolls on a post to avoid the boat hitting the corner of the slip and damaging the boat.
Posted by bnewport at 4:15 PM No comments:

Sump one way valve back flowing

Our sump is attached to a pipe with a one way valve. The pipe goes aft and exits on the aft port side. The bilge pumps water through this pipe. The one way valve is to stop water left in the pipe flow backwards through the sump pump. Ours isn't quite so one-way. It's allowing water in the pipe to flow backwards to the sump pump and then in to the bilge where the pump dutifully pumps it back out again where it then leaks back and we have a sump pump thats continually cycling as a result it seems. About every 30 minutes, it kicks on again and then we wait for the backflow to kick it on again.

The dealer has an improved valve which they plan on fitting. More worrying is the same type of valve (at least to look at) is also on the toilet pipes heading up to the holding tank. If those leak, it's just nasty and sewage will back flow in to the toilet.
Posted by bnewport at 12:30 PM No comments:

As delivered, the water tanks on our new boat were in a pretty sorry state. They clogged pretty much instantly the water pump filter with black stuff which I can only assume is mold. 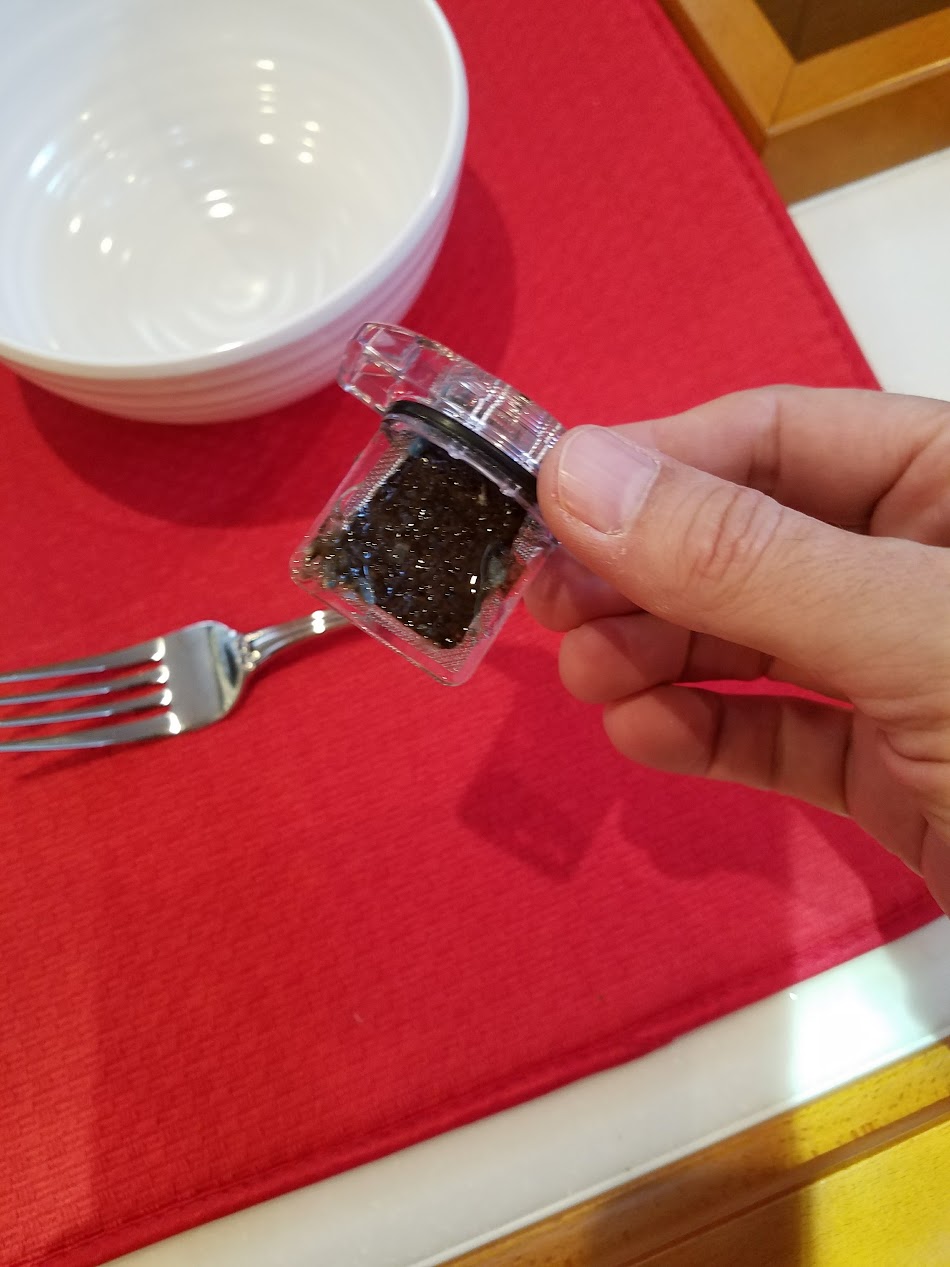 We cycled two tanks forward (87 gallons) and aft tanks (55 gallons) through and cleaned the filter. I then added a cup of chlorox in the forward tank and 5/8 cup in the rear and let it sit. Then drain both tanks, and fill and dump and refill. The water seems reasonable right now, we'll test it at the weekend and report back.
Posted by bnewport at 11:28 AM No comments:

Our lift raft locker lid is bending when my 100lb daughter stands on it. The bolts which are used as hinges at the rear have bent on one side, and the screws holding on the latch with the bolts on each side went through the lid and broke through on the top side. Trying to get a new one which is stronger under our warranty. Very annoying that who ever screwed on those latches at the factory basically ignored the damage and shipped it as is. Quality control... 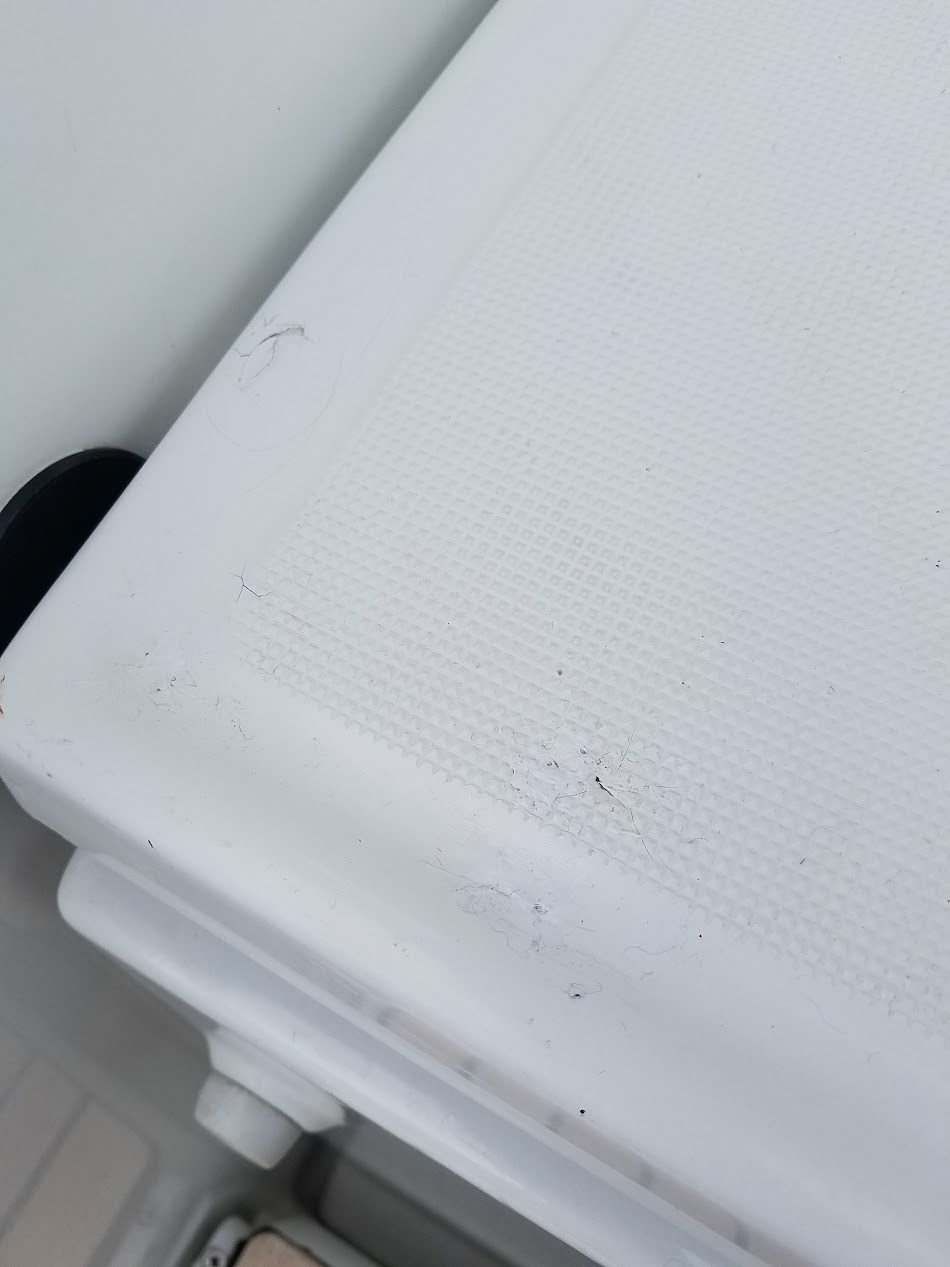 Toilet fills with sea water on a sail, no anti-siphon valves on toilets.

We did a nice sail on Saturday, our first proper sail with the boat. It went pretty well and when we got back, we noticed a lot of water in the forward head and the toilet was full to the brim with sea water. We know it's sea water because the holding tank is empty given the leaking issues I mentioned earlier.

It appears the our boat has no anti-siphon valves on either toilet. So, when its heeled over, water is basically sucked inside the boat from the sea water flush inlet (the electric toilets use sea water for flushes) and into the toilet which overflows in to the boat. Boats have actually sunk this way and the manual for our toilets insists on requiring an anti-siphon valve be installed which Jeanneau seems to be ignoring.

There is a sea cock to close the inlet which we'll need to do but it blows my mind that Jeanneau doesn't fit these standard on their expensive sail boats which are ocean rated. I've asked the dealer if this was a mistake during fitting or if Jeanneau really ships the boats with no anti-siphon valve. This basically means if you want to use the head at sea then you need to open/close the valve or use fresh water from the shower to flush the toilet. We have a head on port and starboard so we could use the high toilet to avoid any water coming in during use.

Anyway, annoyed.
Posted by bnewport at 11:16 AM No comments:

So,
The dealer came and inspected and cleaned the leaking holding tank. The plan was to reglue both forward and aft toilets with a thicker more flexible glue. Unfortunately, the forward tank won't actually open to the sea. We turn the valve but while it moves, the ball in the valve doesn't actually move at all. So, we need to order a new thru hull, haul out the boat and replace it. Meanwhile, the forward tank is now as clean as we can get it so the foul leak has stopped at least. Playing with that valve is a bad idea also as if it was to catch enough to open the valve, the boat would likely sink unless you could close it again which you likely wouldn't be able to with the broken valve.
Posted by bnewport at 11:05 AM 1 comment:

Email ThisBlogThis!Share to TwitterShare to FacebookShare to Pinterest
Labels: Jeanneau, Leak, thru hull

Yep, there was a "weird" smell in the boat since it was delivered. I thought it was the perfumed plastic bags we were using initially but to my horror discovered that wasn't it. The holding tank for the forward v-berth toilet was leaking sewage in to the hull of the boat and it was pooling in the areas under the floor boards. I had the holding tank emptied once I realized this and then spent about 5 hours cleaning it up which I hope I never have to do again. Horrible, horrible job. Of course, it continued to leak in to the hull after emptying the tanks so cleaning it was a waste of time, it just pooled again.

I called Riverside Yachts of NJ who sold me the boat and act as my warranty contact. They informed me that it was an ongoing issue with Jeanneau and Beneteau boats. Apparently the factory used the wrong glue on the holding tank valve to thru hull fitting on both toilets and it hardens to a varnish, is brittle and basically then starts to leak in to the hull. The fix is to replace both fittings with new ones and a more flexible glue. Why the dealer/Jeanneau are waiting for their new boat customers to experience this first hand rather than preemptively fix the boats before they are sold is totally beyond me.

So, Riverside are coming to the marina and doing the fixes and cleaning the boat on Wednesday this week. To their credit, they are acting very quickly on this. I called them Monday, they are fixing it on Wednesday (tomorrow)

This isn't how I thought my first weeks of owning a new Jeanneau yacht would go for me. Lets hope it gets better from here...

The photos show where the leak is. It's a slow leak, there was "plenty" still left in the tank. Whats weird is it drains from there in to a rib in the hull strength area and pools inside the rib which is hollow. It overflows from there on each side through the drainage hole. This is totally messed up and it's draining in both directions! Water is supposed to flow backwards in to the bilge not forwards in to the v-berth. You can see in general, the water does not move easily to the bilge with the hull design. It gets trapped in each section because the hole to empty each section is basically too high. The hole seems to be not on the center line but its to the port side and because the hull is curved, it's then above the low point in that section which looks like a big design issue if I was designing boats. The boat is supposed to be a dry bilge but once water/sewage gets into it, it will not drain out to the bilge without you helping it.